Great to build and a joy to row
by Barry Biddlecombe

When I was an engineering apprentice in the late 1970's, our workshop was part of a large boatyard on the East coast of the UK. It was the time of the GRP tidal wave that finished the use of timber for boat and yacht building. With skilled labour becoming more expensive and difficult to find it was inevitable, but nevertheless it felt like the end of an era. Occasionally though, there remained a beacon of what we loved and would soon miss.

The boatyard were agents for the Danish firm of Borrensons, builders of the International Dragon sailboat, an Olympic class and at that time built in timber. Arrival of a Dragon would attract a small gathering of boatyard workers admiring the quality and finish of these beautiful craft. They truly were a work of art.

Moving forward quite a few years to 2018, I attended the Wooden Boat School in Maine, USA. Whilst there I took the opportunity of multiple visits to their boat store. This was bad news for both my return luggage allowance and credit card but what a wonderful place! One of my many purchases was the book 'Building classic small craft’ by Mr. Gardiner.

This introduced me to many fine craft including one that really caught my eye, the Whitehall. Originally a working boat, it was also later used recreationally with oars or sometimes a sailing rig. Having decided to build one over the winter, I looked at several designs of Whitehall that have been adapted for strip-planked construction. The one I settled for was Steve Killings/Canadian Canoes version sold by Bear Mountain Boats. The drawings were of superb quality and included password access to an online build manual that was extremely helpful.

The build itself is straightforward. Once the mould is set up, the inner stems are located in notches in the forward stations for beveling and the transom is rebated to take the strip ends, eventually being reinforced by a epoxy fillet. The outer stem is glued and screwed to the inner stem/strip ends to provide a neat finish. The strips are 13/16” x 1/4" and whilst most were full length some old growth strips which I used for contrast needed scarf joints which when done carefully are virtually invisible.

When the hull was fully planked and faired, two layers of 6oz cloth were applied with a third layer up to the water line level. This was done using West epoxy with 207 clear coat hardener. The small keel is fitted and screwed down onto the keelson with stainless screws and thickened epoxy together with epoxy fillets. The boat is removed from the mould (which is dismantled) and supported the right way up in shaped cradles. The inside is then faired and a single layer of 6oz cloth is applied with epoxy and 207 hardener. 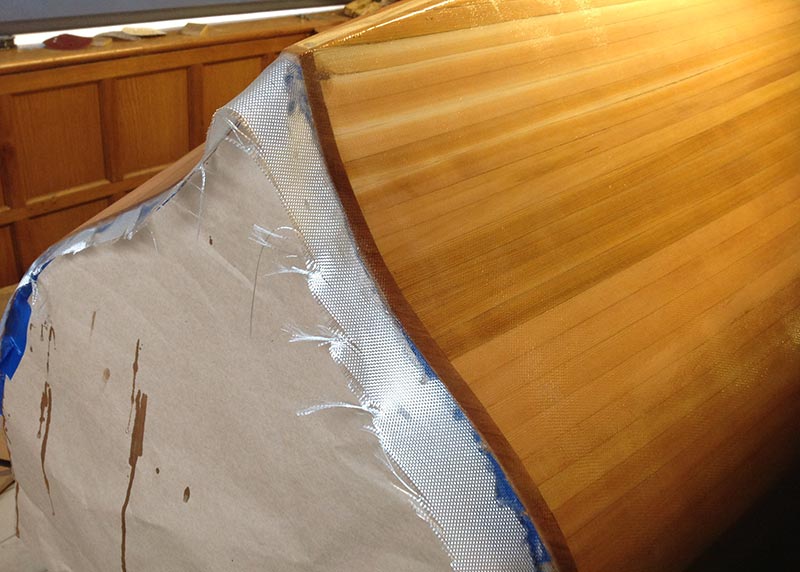 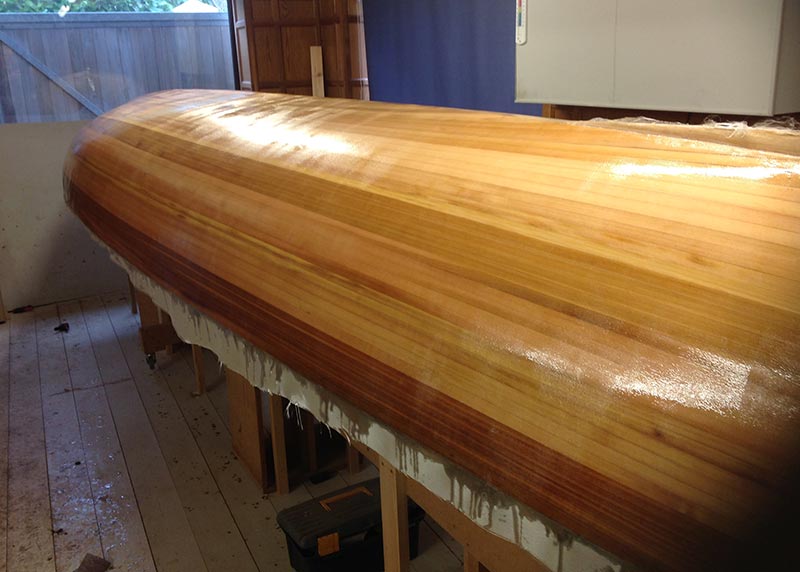 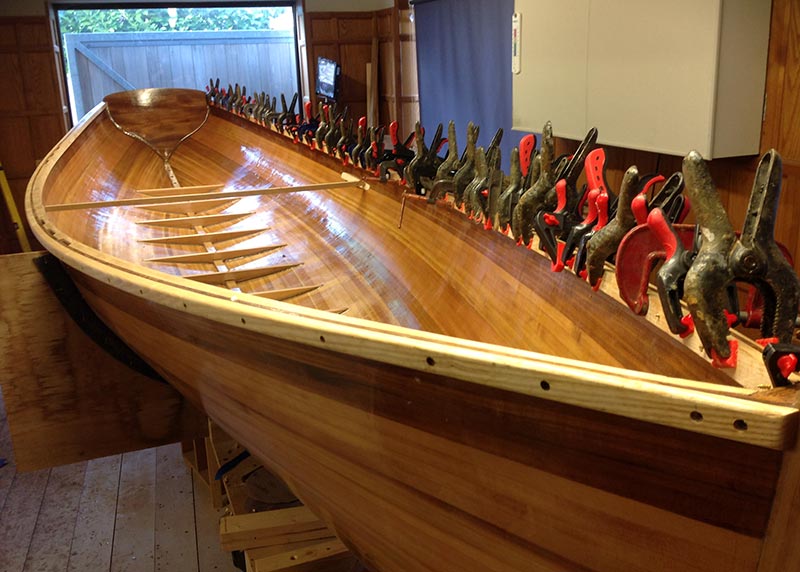 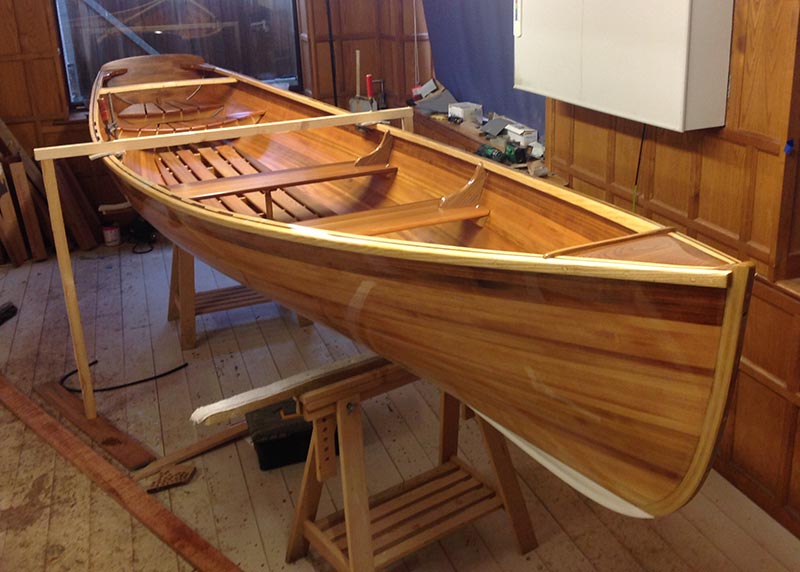 The scantlings were mainly made from Ash with the transom and foredeck in English Elm, one of my favourite woods.The floorboards and thwarts were in Western Red Cedar to save weight with the former treated with a matt non-slip finish and the latter several coats of epoxy and varnish.

I had a lovely pair of gunmetal oarlocks but struggled to find a matching pair for the second rowing position. I was looking at other options when a pair came up on eBay but they were in the US with no international delivery options. Thankfully my good friend Steve Child came to the rescue and I had them within a week (thanks Steve and family). I don't know the weight of the finished boat but I estimate it at around 135 lbs. The hull seems very rigid with no discernible flex anywhere. 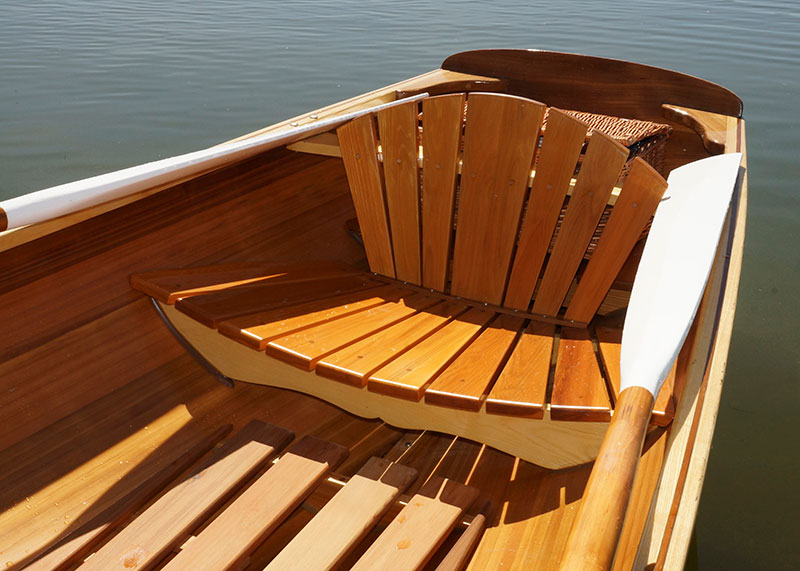 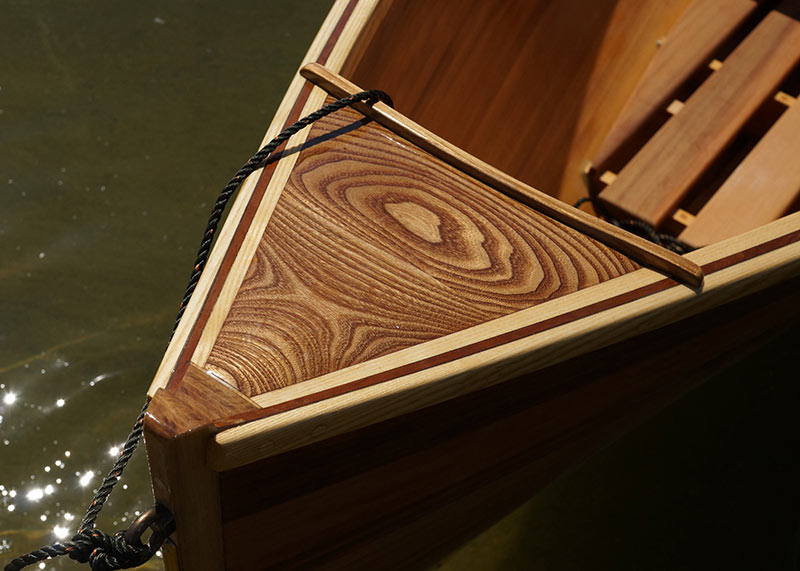 Our road quality seems to have deteriorated in recent years, with a lot of potholes. I was concerned as to the effect of these on the boat when being trailered.

To give as much support as possible I laminated oversized hull supports out of flexible plywood lined with a closed cell foam lining.

The Whitehall was built over the winter months with the intention of launching in the early spring. Obviously the virus pandemic put a stop to all boating activity for a while. When the restrictions eased slightly I enlisted the help of friends to get the boat out of the workshop and onto the trailer.

We took her to Bewl Valley, a local beauty spot with a large reservoir. Launching was exciting as normal if a little nerve-racking! The Whitehall was very easy to handle on the slipway and slid into the water with barely a ripple. My first impressions were along the lines of  “did I build that?” She really has beautiful lines, I would like to describe her but know I will fail, so hopefully the photos will do her justice. The wine glass transom is a joy and from every angle she looks just right.

Most of my previous rowing experience had been in small general purpose boats. Rowing the Whitehall that first day changed my whole appreciation of rowing, it is so satisfying to propel this little craft along almost effortlessly. She wants to go, to be rowed. With her fine entry, the water is gently pushed aside with ease, with the longish keel she tracks perfectly leaving a very clean wake. Windage with the low freeboard will not be a problem. This skiff is what I call a 'good runner' i.e. she carries speed very well indeed. I really feel as if I could row all day in this boat. 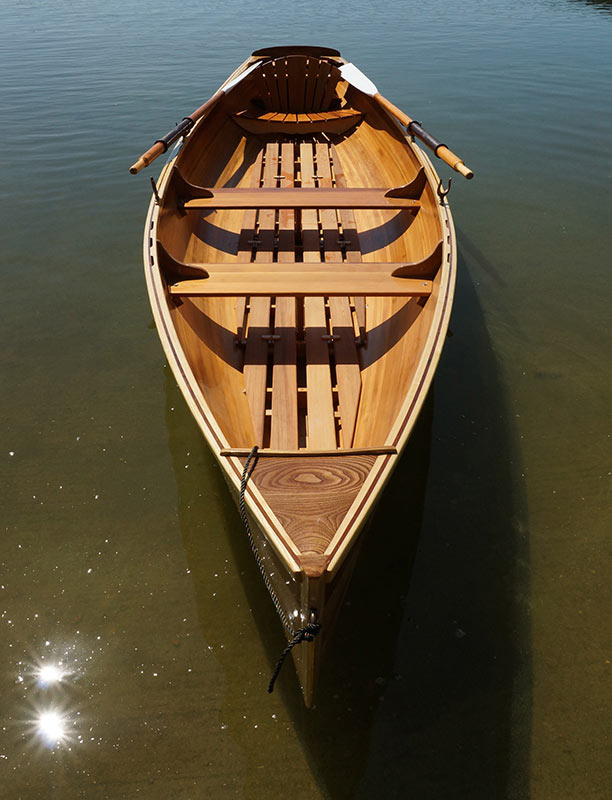 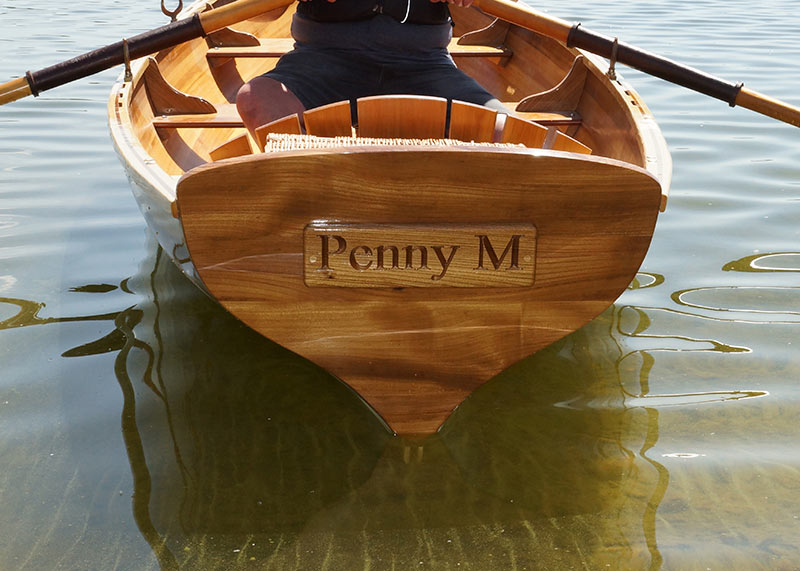 About the name Penny M

During the winter build period, we heard from our great friends Dave and Penny McArdle in Nova Scotia. Penny had been taken ill and despite Penny being given the very best of treatment, she sadly lost her fight with cancer later that year. After asking Dave’s permission the choice of a name for the little vessel was thus made easy - The 'Penny M’.

Below - see 'Penny M' in action